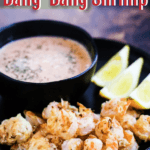 Air Fryer Bang Bang Shrimp is kind of a dream come true for me. It’s easy to make (like, really easy!), delicious, and tastes like it’s really naughty but it’s not. It’s even gluten free, which means my husband can enjoy it. And my 11-year-old son loves it, too.

As an Amazon affiliate, I earn from qualifying purchases.

First off, I should confess that I had never heard of Bonefish Grill until my son came home from a friend’s house and told me about amazing bang bang shrimp his friend’s mom made. Of course, I had to look it up. I found lots of copycat recipes based on the BG dish and they were all similar. Shrimp tossed in buttermilk and then dredged in cornstarch (or panko breadcrumbs), fried in a skillet, and served with a creamy, sweet, spicy sauce.

I love it when my son gets excited about new foods, so I made a version of the original dish a few days later. It was delicious, but cooking it was so tedious—frying all those shrimp in a hot skillet. Talk about slaving over a hot stove. Plus, I felt a bit guilty eating it knowing that the crispy coating on the shrimp was drenched with oil. Also? My kitchen was a mess afterward with oil splattered all over the stove and counter.

Could I Make an Easier, Healthier Bang Bang Shrimp Recipe?

That’s when I got the idea to try to create an air fryer bang bang shrimp recipe. Wouldn’t it be so much easier and healthier if you could dredge all the shrimp, put them in the air fryer, and have them turn out crispy and light?

How easy is it to make Air Fryer Bang Bang Shrimp?

Super easy. This Air Fryer Bang Bang Shrimp recipe is a cinch to make. In fact, it’s even easier to make than the original/copycat versions.

What kind of air fryer should you use?

I have made this recipe using both my Mealthy Crisp Lid and my GoWise Air Fryer. Both work well, but the GoWise took a little longer. Using the Mealthy Crisp Lid, I cooked the shrimp at 450ºF, but since the GoWise only goes up to 400ºF, I had to add a couple of minutes to the cooking time.

What to serve with Bang Bang Shrimp?

Bang Bang Sauce, obviously. But seriously, Bang Bang Sauce is delicious on everything, so of course, it’s the perfect thing for these crispy Air Fryer Bang Bang Shrimp. If you want to make a lightened-up version of Bang Bang Sauce, you can substitute low-fat Greek yogurt for the mayonnaise and/or sour cream.

Is it an appetizer or a main dish?

You can serve Air Fryer Bang Bang Shrimp as an appetizer, but I like to serve it as an entree for my family. I serve my Air Fryer Bang Bang Shrimp with noodles—either lo mein or rice noodles—and a green vegetable like steamed broccoli or blanched green beans. The sauce can be drizzled on the shrimp, noodles, and veggies, or you can serve each person a small bowl of the sauce for dipping.

If you love shrimp like I do, check out some of our other shrimp recipes like Szechuan Shrimp, Shrimp Bisque, Crepes with Shrimp, Tomatoes, and Chives, and Asparagus and Shrimp Salad.

Need ideas for using up leftover buttermilk? Try these recipes

Nutrient values are estimates only. Variations may occur due to product availability and manner of food preparation. Nutrition may vary based on methods of preparation, origin, freshness of ingredients, and other factors.