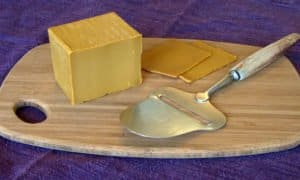 If you're familiar with gjetost cheese, chances are good that you've already formed a strong opinion about it. Like marzipan or Vegemite, Norwegian gjetost (pronounced yet-toast) is considered by some to be an acquired taste, and can be a particularly polarizing food outside of its native homeland.

We here at Two Lazy Gourmets are split down the middle by this divisive delicacy/oddity. When the topic occasionally comes up, Robin wrinkles her nose and offers as charitably as she can, "Oh yeah, gjetost...my friend's kids love that stuff." I, on the other hand, first tried this sweet, dense, orange-brown cheese about twenty years ago, and after an initial instant of palate confusion I was totally hooked. I had acquired the taste in a matter of seconds.

Gjetost, which means “goat cheese," is a variety of the centuries-old Norwegian tradition of brunost ("brown cheese"). Brunost comprises many different dairy products made from cow's or goat's whey. (Because brunost is made from whey, as opposed to curds, it's technically not a genuine cheese. But whatever. It says cheese on the package.) It's made by slowly simmering the ingredients until the water evaporates and the milk sugars caramelize, which results in the distinct brown color and caramel flavor. Some varieties use only goat products, while others use only cow products—giving them stronger and milder flavors, respectively. The rich and delicious Ski Queen brand of gjetost that's relatively easy to find here in the U.S. contains a combination of goat's milk, cow's milk, cream, and whey. And thanks to all of the mouth-watering research I've been doing, I'm now on a mission to find prim—a spreadable version of brunost comparable to dulce de leche. I haven't yet found it here in San Francisco, but I'll keep looking. Or start planning my next vacation.

For the uninitiated: Gjetost comes in dense, rich, vinyl-smooth blocks; melts slowly in the mouth; and tastes like a tart, salty caramel candy. It's traditionally enjoyed on toast, shaved into thin slices, sometimes accompanied by jam. I love it with apple or pear, or just by itself with coffee.

Last weekend I gave my friend Carolyn a ride from San Francisco to Los Angeles. In my snack bag I had packed, among other things, apple slices and gjetost. I was a little apprehensive about introducing her to it, for there was a reasonable chance that she, as a brown cheese newbie, would find it thoroughly disgusting and forever remember me as the weirdo who can't just chill out and eat Doritos on a road trip. My reputation was unharmed, however, as Carolyn spontaneously reacted with the same piqued glee that had grabbed me twenty years ago. This experience inspired me to conduct experiments on a handful of other friends who had not yet acquired (or rejected) the taste for gjetost. The results were mixed, as expected. A couple of them loved it, a couple were indifferent, and one seemed a little weirded out but kept going back for more.

So now I want to know what you think. Do you love gjetost/brunost? Hate it? Not sure? Post your opinions in the comments section. And please include any great ideas for use. I'll be thrilled to discover new ways to enjoy my favorite curd-free, whey-based, Norwegian dairy product!